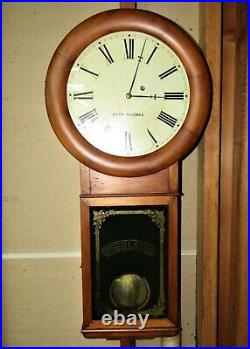 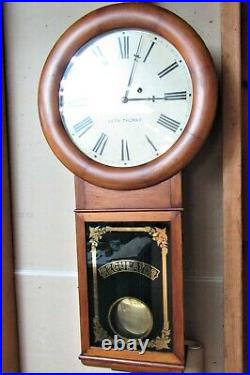 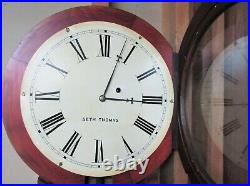 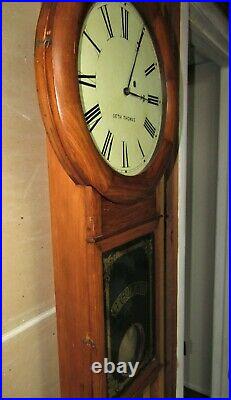 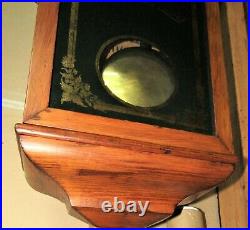 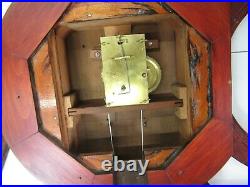 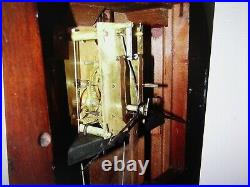 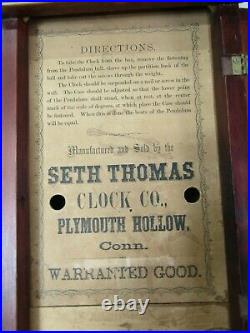 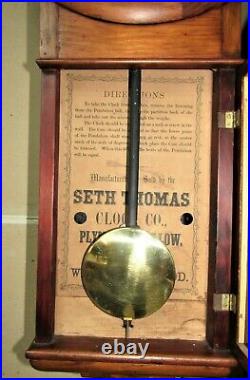 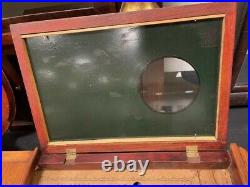 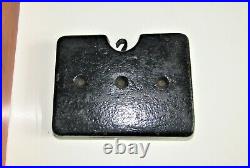 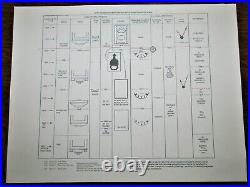 The Seth Thomas Regulator clocks were introduced in 1860. The movement was one of S. The movement is identical to movements I have seen in other S. Terry regulators and many early Seth Thomas regulators. Early #2’s did not have a second hand. If you look up some of the S. Terry’s Slant Bottom Wall Regulators. You will see these Clock Hands and Movements. Some movements had a second hand bit, some (as this one) do not. The 34 high cherry case is very nice and all original except the Lower Glass is a replacement. The Upper Door glass is surly Original that it’s very wavy and no sign of being ever removed. The case looks to be solid cherry as I see no signs of veneer. The face is original with an older repaint. The Original Paint would have been plain, with out the painted “SETH THOMAS” on it. The Pendulum stick has a repair done in the middle and painted black. The original stick was painted a bright gold from the top of the door opening to the bottom. The Pendulum Bob is a Later Seth Thomas #2 replacement and a bit big for the stick, but works. Some Pendulum sticks are a flattened oval shape. This one more of a rounded oval. The heavy 9 Lb. Cast Iron flat weight is correct for this clock. It is either a painted black repro. Or the original someone painted black? The Plymouth Hollow, Conn. Label as seen is in very good shape. This clock is not fancy, but it is very rare. This is only the third one I have seen. The Plymouth Hollow, Conn Pendulum Bob I have, does fit this Pendulum stick. The size is correct, but the years of production do not. Clock is early 1860’s. Bob, guessing late 1870’s from the clocks I’ve seen them in. (But would look good). Both Rare and hard to find. You will see this same clock that looks to be original with it’s proper lower glass. Also next to it is a Silas B Terry’s clock for you to check out it’s “matching” movement. I have a wavy plate of glass that can be cut to fit, I’ll send with clock. The glass that’s in there now is new. There are a few clocks that have some one thing that pinpoints a time in history. For Seth Thomas, this was the start of their production of large wall clocks. This is one of those that is also seen in Their first 1863 sales flier with other wall regulators #1 and #3. The item “Seth Thomas Clock Co. Plymouth Hollow, Conn. First Regulator No. 2, ca 1863″ is in sale since Friday, May 21, 2021. This item is in the category “Collectibles\Decorative Collectibles\Clocks\Wall Clocks”. The seller is “boomer422″ and is located in Saint Joseph, Michigan. This item can be shipped to United States.